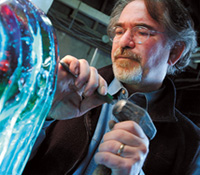 My studio work is focused on stone, glass and steel with occasional pieces in other materials. The current body of work tends to be self reflective. Stone and steel balance, support and cantilever their way towards a visual resolution. Each piece is a silent witness, in dynamic tension. Influences include Noguchi and David Smith as well as architects Le Corbusier and Mendelsohn. Compositions bring the unique qualities which each material manifests into dialogue, and when successful, offer a moment of reflection.

I was born and raised in the Bronx. My formal fine arts education began in New York’s High School of Music and Art, followed by undergraduate studies at Hunter College. After teaching Fine Arts in a South Bronx Junior High School, and a year of travel, I settled in Boulder, Colorado, developing sculpture and jewelry of wood, stone, silver and deer antler. Work at the time was greatly influenced by the amorphous forms of Jans Arp and Henry Moore. While working at Quest Foundry, I was exposed to all phases of wax modeling, bronze casting and finishing. At this time I became a student of Yoga, later a teacher and director at the Boulder Integral Yoga Institute. This pursuit was continued at the Satchidananda Ashram in Connecticut. I worked as a carpenter, building homes, and later as a cabinetmaker for a sailboat manufacturer, learning about finely crafted details. A four-year graduate program at the University of Maryland School of Architecture gave me a new perspective in three dimensional design. I have worked for many years as a Registered Architect and Project Manager in several area firms and at NASA’s Goddard Space Flight Center. This ongoing education in construction methods and materials, and my studies in Yoga continue to inform my sculpture and challenge my aesthetic directions.